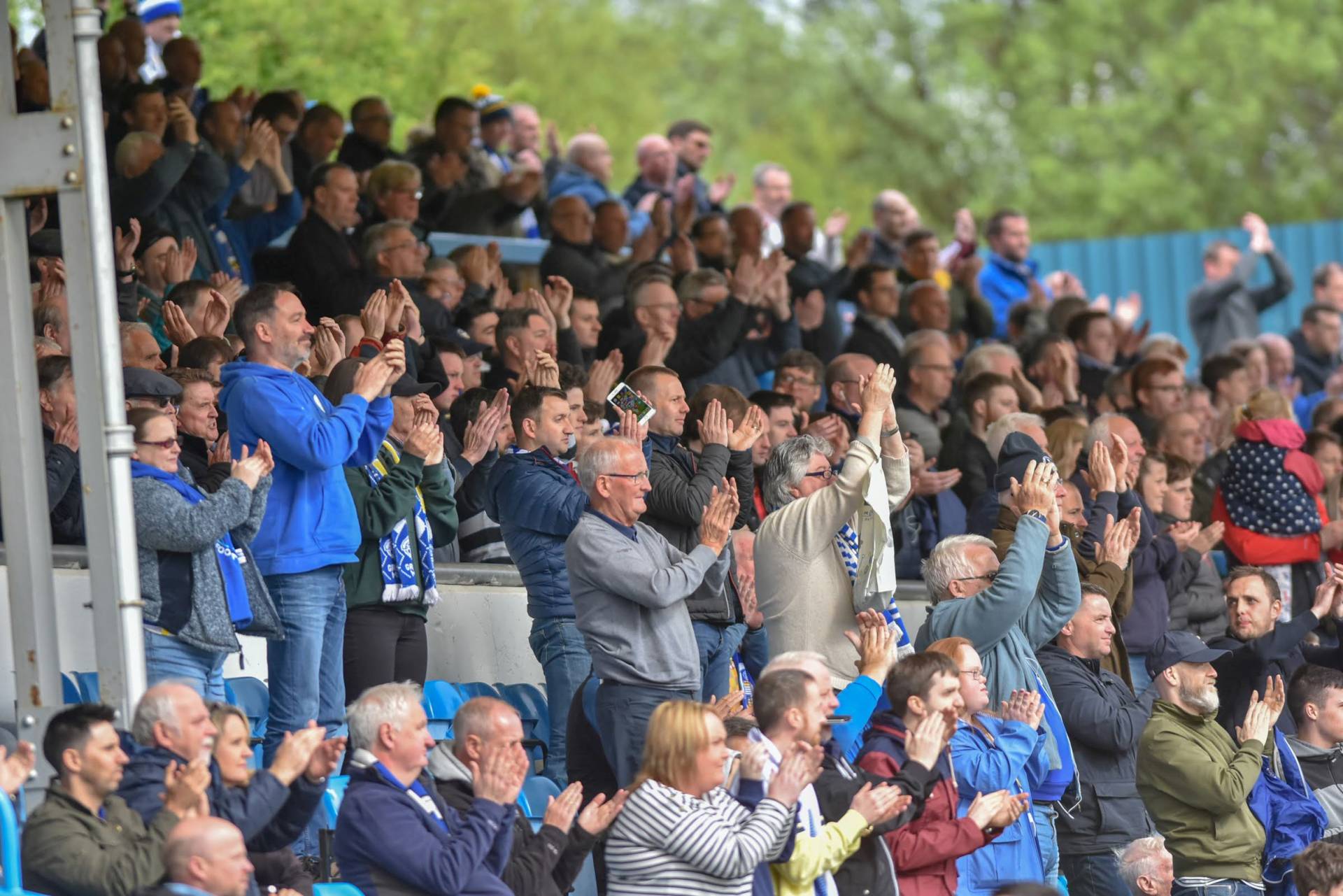 At the end of last week, Morton Club Together Marketing and Communications Director Graham Barr was delighted to answer questions from fans on the Just One Cornetto Podcast by The Morton Forum.

For those of you who have not managed to listen, we have pulled together the answers to the questions in written format below:

Q: When exactly does MCT expect to take over the playing side of the club?

A: The plan at present is to take over ownership on the 1st of June.  In the meantime, we will be involved in longer term discussions around the future of the club such as extending playing contracts, commercial agreements, season ticket strategies and so on.

Q: When is a new manager expected to be in place? If this is not before the end of the season are they going to address player contracts before the season is complete and will the new manager be involved in these decisions?

A: The interim management team are in place until the end of the season when a decision will be made about the way forward.  The current interim team have been consulted, and that consultation will continue, about signing players for next season.

A: This is obviously an area I’m very focussed on with my role heading up that side of things at MCT.  MCT has a strong marketing and commercial team that have been working to improve existing offerings and develop new ideas to increase commercial revenue at the club.  We will also look to work alongside staff at the club to understand what has worked in the past financially, and what perhaps hasn’t.  Recently MCT put forward the idea of the festive offer to the Greenock Morton board, when you could but the two home games around Christmas for a slightly discounted price of £25.  Behind this idea was a fully planned out campaign with a content plan leading up to the end of sales.  120 people purchased this offer which is a positive sign that it had a decent impact.  That small example is a good indication of how we will approach things – agreeing a concept that we think will appeal to fans and the putting a full plan in place and executing it.  It’s the approach we will take to things such as season tickets, kit launches, game by game sales and much more.  Overall communication, visibility and consistency are the keys.  For me this is key and something that has been lacking.  If people have ideas, please let us know and we will consider everything. From a sponsorship point of view, we want to maximise the potential income the club makes from that.  By improving the communications, presence, and social media output of the club, we will also make the club more appealing to these potential sponsors.  We will look to develop existing and new commercial partnerships within the Inverclyde community and beyond.

Q: Is the playing budget likely to increase decrease or stay the same when MCT takes over?

A: We hope to see the budget increase, but that currently depends on when we can welcome fans back into Cappielow.

Q: A peppercorn corn rent has been widely talked about. Do MCT have to pay commercial rates for the ground or is this included in the peppercorn rent deal with the landlord?

A: Yes the club will be responsible for commercial rates.

Q: As far as the none playing side goes what else do MCT see as their major assets and overheads?

A: Of course, we understand that fans see Cappielow as the club’s main asset, and negotiations are ongoing around that.  We will update fans as soon as we can on that.  The biggest and most valuable asset to Greenock Morton is our license to play in the professional leagues in Scotland. The Morton brand is also a huge asset, with an almost 150 year history, strong links to the community and loyal supporters.  In terms of major overheads, the biggest outlay is of course the wage bill.  There are plenty of other costs associated with running a football club, but there are also a significant amount of income streams that can be maximised as well.

Q: What will be the most significant change when MCT come into the club?

A: I may be slightly biased coming from the comms side of things but first and foremost there will be a huge improvement in communications from the club.  As a fan owned club, we will look to be open and transparent with the fans at all times.  We will look to share everything we can and provide timely updates on a regular basis.  Linked into this is the club’s marketing.  We will look to promote all aspects of Greenock Morton whether that be season tickets, kits, merchandise or indeed just the promotion of the matches themselves.  As a community owned club, we will also look to shine a light on all of the positive impacts Greenock Morton have on the local community, especially highlighting the great work Brian and the team do at Morton in the Community.

Q: Will we be looking at staying full-time next season?

A: The simple answer is yes. We have no current plans to become a part time club and we believe through the work that we’ve carried out that Morton can be run sustainably and successfully as a full-time club..

Q: When MCT take over the running of the club, will the existing volunteers be kept on, who currently help the club with mascots, programmes, match photography etc?

A: Absolutely, the club have a lot of people who have given up their time over the years and we would appreciate their continued support.  We’ll also look to supplement this volunteer effort with our own volunteer team who will hopefully be able to extend that amount that can be done at the club.

Q: How can MCT expect to run a club on £100k a year and what are they doing to secure investment seen as there has been none other than from fans?

A: An important point to note is that there are many different income streams that we will look to maximise such as season tickets, kit sales, sponsorship, matchday attendance and merchandise.  It is our goal to improve the club commercially and generate more income than has been generated in the past.  There are also efficiencies that can be made, and some which have indeed already been made that will help Morton to operate successfully.  MCT are also looking to have patrons who will contribute £25,000 per year to the club.  We have secured patrons and sponsors already. Many of them wish to remain anonymous and we are continuing with our efforts to secure others. It is not a case of we need 4 patrons and 6 sponsors but rather the more income we can generate from all sources, including patrons and sponsors, the more money we can put into the playing budget and beyond.

Q: MCT are making club decisions now. In the club daily too. These are the guys who can answer. No news on releases and resignings. Why not? They did previously. I preferred club coms from Gerry Mcdade maybe stopped now.

A: The first thing to say is that the general premise of this question is false. MCT is currently present within the club on virtually a daily basis through Gordon Ritchie who is now one of the club’s Directors.  The main purpose of this is to learn the operations of the club, not to run it.  This is proving extremely valuable for MCT in our preparations for community ownership and we thank Gordon for giving up the time he is to be in Cappielow on a daily basis voluntarily.  We currently have two votes on a board of seven, so we have influence through that but not control. With regards to the news side of things, we are not in control of the club’s media outlets.  As I’ve mentioned already, we will look to significantly improve the club’s media output when we do takeover. Our current involvement with the club is about one thing and one thing only – safeguarding the future of the club and ensuring MCT is fully prepared to take over in June.  Any suggestions or ideas we have put forward to the club have been done so through the Morton Board, for example the festive offer that ran in December that I talked about earlier.

Q: Why have MCT been called out in the leaked document?

A: I suppose the only person who can really answer that is the person who wrote the document.  Much of my answer to the last question addresses the false accusations made of MCT in the document.  As I’ve said already, I think most fans understand that we’re simply trying to get in the best position possible for ownership in June.  It’s fair to say that there has been some resistance from a very small number of people who seem to want MCT to fail.  Overall, we’re committed to providing an exciting future for Morton for the people who matter most, and the people we are working so hard on behalf of – the fans.

Q: Are we going to play on an astro pitch next season?

A: There are no plans to play on an astro pitch.  The Cappielow pitch has been a pride of the club for a number of years and Mark has done a great job maintaining it.  Unfortunately there’s no getting away from the fact that the pitch has suffered this year and is poor right now, but we’ll look to support Mark to get the pitch in as good a position as possible for next season.

Q: Can we see more transparency with the running of the club and better communication with the on-going surrounding the club and the business dealing, the fans feel left out with anything that’s happening at the club?

A: Yeah we’ve talked about this already but it is such a simple thing to improve. Communication with our support is vital. We’re here to ensure that, as far as we can, our members and supporters have as much information as we can provide.

Q: Can we start bringing in local talent from the area, we’re missing out on some great players that Morton should be picking up on rather than other clubs finding these players (Morgan, Taylor etc)?

A: No youth system is perfect, and unfortunately we will always see some local players slip through the net with all the best will in the world. We also have to be realistic and recognise that the old firm has a massive pulling power in our area. However, it is always disappointing when we hear of local youngsters who have slipped through the net and our plan includes a closer link between the youth academy and the community, and with the first team. We want to see players graduate from the academy and play first team football at Morton. We have two great examples of what can be achieved with Lewis and Reece and we want to see more of that for Morton.  The more we see that happening, the more Morton will become an appealing option for youngsters.  We also feel that Morton provide a great platform for young players to start and progress their career.

You can listen to the full podcast here – https://just-one-cornetto-a-greenock-morton-podcast.simplecast.com/episodes/episode-21-qots-reaction-championship-23rd-jan-and-mct-director-qa